Sometimes it's better just to fork out the money.... 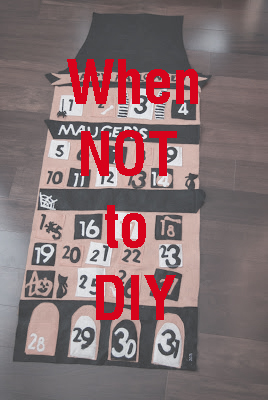 Let me tell you the whole story.... Last year Pottery Barn Kids had this felt Halloween advent calendar that I fell in LOVE with. I was however NOT in love with the $59 price tag.

I raced over to Pottery Barn on November 1st last year in hopes of scoring one on clearance, no such luck. They were super popular and had sold out well before Halloween. Then I thought, DUH Jenn you could totally make that! So I raced over to JoAnns fabric and bought $3 of felt and tucked it away with my Pottery Barn Catalog to create next year.

Fast forward to this year... I started the project at the end of September thinking well it should take a few nights but I should be able to get it done in time for October 1st. How very naive I was!!!

First off I had planned on cutting all the little shapes and numbers with my cricut. Note: Cricut's can not cut felt. So I ended up cutting it all by hand. This doesn't seem like such a big deal but it was VERY time consuming. I didn't even get it all cut before October 1st.

Then I had it all cut and laid it all out and WOW it looked just like the Pottery Barn one and I was again jazzed about the project. I did not however consider the time it would take to applique on almost 200 tiny shapes. I worked on this sucker almost every night in October (I took off a few nights when I had a nasty cold). I finally put in 5 hours on November 3rd and got it done.

I have this idealized notion that this is something my kids will cherish for years. They will show their kids...look what your grandmother made. It probably will end up barely used, tucked away with all the other Halloween stuff. 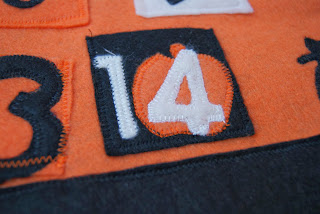 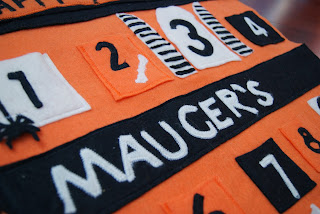