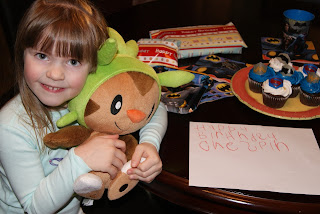 Big A recently had some minor surgery and was given a stuffed Pokemon character as a get well present from Ma and Pa. Not to leave out little a they got one for her too, a crazy little brown character with a green hat named Chespin. I thought she would not really care about it since she is not into Pokemon like her brother is. I was totally wrong. That little guy has become her favorite snuggle buddy who she sleeps with every night.

One night little a announced that "Tomorrow is Chespin's Birthday! He wants a Batman vs Superman cake and decorations and I HAVE to get him a present!" She was so excited for this and had so thought out the planning of the "party" that I decided to just go with it and have a Birthday party for Chespin! Big A asked me "Mom, are we REALLY gonna do this? It's so lame."

We went to Smiths (local Grocery Store) and found Batman vs Superman cupcakes for Chespin and some perfect presents (clearance Easter candy! 75% off!). Big A had a batman party last year so I dug out the banner and leftover plates and napkins (my decoration hoarding came into use!).  Little A wrapped the "presents" and made Chespin a sign and invited Ma and Pa (who brought Chespin a gift! (fruit snacks!).

It was a crazy fun Party and little a was so happy and she told us Chespin was "Super, SUPER Happy!". As the party was winding down Big A came over to me all sheepishly... "Mom, I think Pikichu's birthday is in a couple of days!" 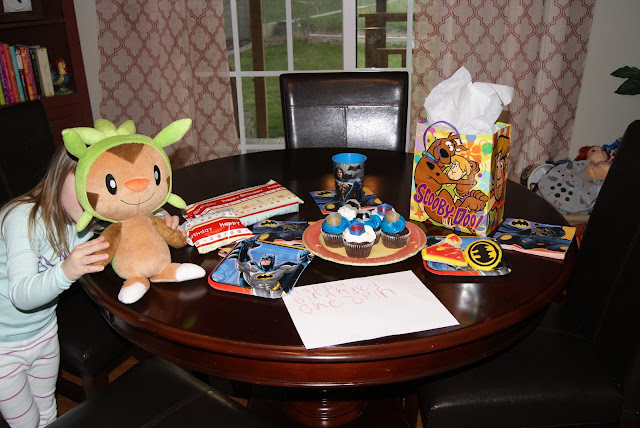 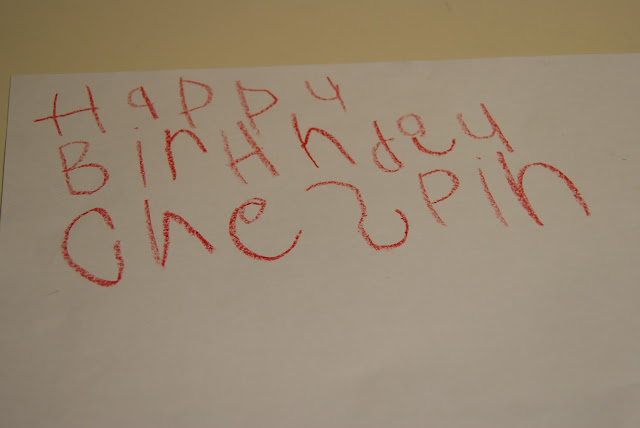